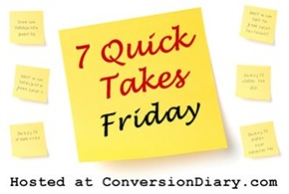 This week’s post:  Is here!   Attraction is a mystery.  The gift of self requires the merging of our body and soul.  May you be blessed!

Our Beloved Pope:  Can you imagine the grace that will result because Pope Benedict XVI is investing his sunset season of life praying for us and offering up his suffering for us?  I also look forward to the treasure trove of wisdom that is unlocked as we study his writings.  It reminds me of how Humanae Vitae (Pope Paul VI) and Theology of the Body (Blessed Pope John Paul II) took years for us to grasp and appreciate.  Thank you, Pope Benedict XVI.  You are loved tremendously!

Apostolic Succession:  This entry was supposed to go into my 7QTs last week.  However, I think that considering the announcement by Pope Benedict XVI, the Holy Spirit may have moved me to save it for this week.

The theologian Tertullian (c.155-220) wrote a prescription against the heretics which states that in order for a church to reckon (love that word!) themselves apostolic, they must be an “offspring” of the Apostolic Church.  These Churches must receive the ‘shoots of the faith and seeds of doctrine’ passed down from the Apostles who received the Holy Spirit directly from Jesus Christ.

“They set out through Judea first, bearing witness to their faith in Jesus Christ and founding churches, and then out into the world, proclaiming the same doctrine of the same faith to the nations. Again they set up churches in every city, from which the other churches afterward received the shoots of the faith and the seeds of doctrine and continue to receive them every day, in order to become churches. By this they are themselves reckoned 🙂 apostolic as being the offspring of apostolic churches… These churches, then, numerous as they are, are identical with that one primitive apostolic Church”

Downton Abbey~ Boo Hiss:  Oh, I know that this will not be well received by all the D.A. fans but let me just share with you what happened last Friday.  I had heard all about the series and thought I’d give it a try.  I ordered Season One.  My husband and I (and our son) really enjoy the Jane Austen A&E movies and I assumed this series would be similar.  I was also excited about the era (1912) being depicted.  Okay, so far so good.

So, with our child safely off to school, we cuddle up on the couch for some Downton Abbey.  And, we were really enjoying it.  Until. The. French. Kissing. Started…..ummmm between two dudes!!!!

Oh look, I know same-sex attraction has always been a fact.  But, good Lord, do the agenda people have to stick their grubby liberal fingers in and ruin everything?  I mean, it totally took me by surprise (my husband saw it coming).  Thank God, our innocent child was not home.  I had to cover my eyes and my poor husband had to fumble and quickly grab the remote to turn it off.

Why?  Am I a prude?  Maybe.  But, I would like to propose that it is about trust.  We can’t trust these people with their surprise attacks.  We would always be on guard for the next liberal agenda plug.

Also, what happened to the art of subtlety?  The plot would have been interesting if Mary was suspicious that the Duke was gay and had to grapple with what to do.  It would have been fine.  But, two dudes French kissing was not cool.   Our eyes were made for holy things and that was Not Holy.

More Silliness:  I have this theory.  I think that premarital sex extinguishes the excitement that should be part of the wedding day.  So, brides and grooms have had to up the ante to make their wedding “memorable.”  This is and example of what they are doing. Lord help us and forgive us.

God Bless You, Celeste:  Ike Ndolo is a popular Catholic musician and artist.  His brother and sister-in-law, Kemi and Corinna, went into the emergency room on Monday night, February 11th, and Tuesday night on the 12th, gave birth to their 23 week old little girl, Celeste. She stayed with them for three hours before going to be with God.

Donations for the Ndolo family are being accepted here. 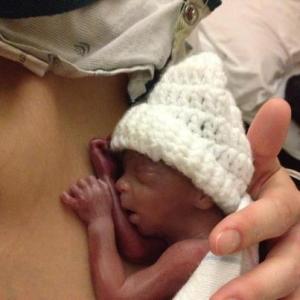 Infertility:  My husband sent this to me this week knowing that I would be moved by it.  It was written by Colleen Carroll Campbell.

Gregg and I have one miracle child on earth and at least two in heaven.  I have not experienced judgement from those with big families and in fact I find myself with a big smile when I see big families.  But, I have wondered if they think that we are contracepting or if we maybe only wanted one child.  I think the following is a good reflection for us all:

“There’s a great deal that the Body of Christ can do to minister to women and men suffering from infertility. For starters, we can pay more careful attention to the way that we speak to and about childless couples and, particularly, childless women. We live in a contraceptive culture that regards children more often as burdens than as blessings, and tends to disparage or marginalize large Christian families. So those of us who move in committed Catholic circles often rebel against this mindset by going out of our way to show our pride in and appreciation for God’s gift of children. This is a good thing. But in their zeal to set themselves apart from the secular culture and its anti-child ethos, some faithful Catholics swing to the other extreme (usually unintentionally), focusing almost exclusively on how many children a woman has when gauging how serious she is about her faith. A Catholic woman with six or eight or 10 children is very likely one who has embraced Church teaching wholeheartedly; it’s true. But that woman in the back pew at Mass with no children, or only one child, may not be the contracepting, cafeteria Catholic you suspect. She and her husband may actually be buried in grief over the children they cannot conceive, clinging to the Cross for dear life as they try to survive the holidays, nosy questions from relatives and disapproving looks from fellow believers who have misjudged them. So when we think about ministering to those who are suffering the often hidden cross of infertility, the first thing we should do is remember to reserve judgment when approaching childless couples, as we may not know the full story.”

God love and bless you!

For more Quick Takes, visit Conversion Diary!  We are praying for you and your little baby, Jennifer!